And I Tried Learning Batik.... 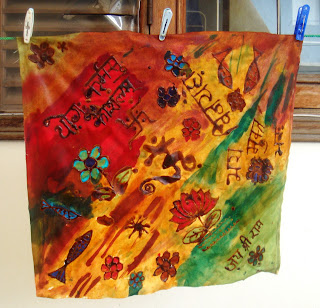 Batik is the traditional fabric of Indonesia. It is said that Batik or writing using wax is originated in India. In West Bengal, one can easily locate people wearing Batik Kurta. In my teen age, I had a likeness for Bengal Batik skirts and Kurtas. I was under the impression that Batik is very Indian and is very limited in outreach too. Then in year 2010, in my trip to Indonesia, I came across something fabulous,smooth and traditional.....PheW that was Batik. It actually took a day to accept this Batik...when this follows almost the same process ( advanced here in Indonesia) and one can also find traditional Batik Kurta (better in design) in Mirota Batik Store at Yogjakarta. This was overwhelming..with so many types, patterns , fabrics,associated history and culture.

Batik is Indonesia’s one of the highly acclaimed, highly developed and widely used art form. Yesterday, I tried learning Batik from Mbak Ayu. She gave me a white cotton cloth as it can easily absorb the wax and easy to colour. She told me to use a tiny iron metal closed spoon attached with a thin pipe, through which the wax seeps. Then she handed over a small container full of hot,consistent,watery wax, and instructed to draw some designs on white cloth. Drawing designs and me…Yuk! By the way Great Google says word batik is thought to be derived from the word 'ambatik' which translated means 'a cloth with little dots'.
Without giving much thought I started drawing some patterns – I started with ॐ (OM .I do not know why).  Om is a sacred syllable in Hindu, Buddha,Sikh and Jain religion. Bali,in Indonesia, also has a similer symbol called as Akara. Then I drew योगः कर्मसु कौशलम् meaning excellence in action is yoga.
I like a few more Sanskrit phrases as well, such as
सा विद्या या विमुक्तये   - That is knowledge which liberates
आत्मनो मोक्षार्थं जगधिताय च - For one's own salvation, and for the welfare of the world
My eternal favourite is तमसो मा ज्योतिर्गमय - Lead us from Darkness to Light….but this was tough to write on a cloth using a spoon and watery hot wax. Then I wrote a few more words and drew some patterns/symbol. So the photo above is my creation….i did initial two steps yesterday, will work on some dyeing process today.
Thanks so much for reading!

Posted by Sonmani Choudhary at 10:14